The unseen hazards of researching sugar

Welcome to my new blog - Sugar Rush. Thanks for visiting.

I'm already 3 months into my fellowship and it's already becoming increasingly clear that it is going to be impossible to write about sugar without writing about the intense fat-phobia that travels hand-in-hand with anti-sugar campaigning. I'm still not at all certain how to untangle it all, but I'm experiencing a growing discomfort with the aggressive treatment of fat bodies that I am encountering in the attack on sugar. I wrote this short post about the personal challenges of researching sugar for the Centre for Interdisciplinary Gender Studies (CIGS) blog, and I've reproduced this below. It seems like a bit of a negative opening for the Sugar Rush blog, but I suspect that this is going to be a recurring and important theme that I'll continue to develop as the project progresses. And it's not all negative either, thanks to the restorative powers of feminism.


A few weeks ago, as part of my ongoing research on the social life of sugar, I set myself the task of watching a series of anti-sugar, and by extension, anti-obesity, documentary films. How do they tell the story of sugar in contemporary society? What evidence do they draw on? What imagery do they use? Who are the authoritative voices of anti-sugar? How do gender, race and class figure in those narratives?
Over just a few days, I watched Cereal Killers, Run on Fat, The Big Fat Fix, Fed Up, What the Health, and Carb-Loaded. I watched each one twice; the first viewing was to get a general sense of the film, and during the second, I took detailed notes. It sounds leisurely and entertaining to watch films for research, but by the time I got to What the Health – an anti-sugar, anti-dairy documentary promoting a whole-food, plant-based (WFPB) diet – I started to feel inescapably sad at the overwhelming fat-hatred that runs through the films. I took stock and revisited my notes. They recorded over and over again the use of what fat activist, Charlotte Cooper calls the ‘headless fatty’ images – fat, headless torsos, thighs or backsides, often with hands clutching packages of fast food, from which we are supposed to deduce a lifetime of poor choices and devastatingly expensive health problems. A parade of ‘experts’ – predominantly white, male, middle class professionals – proclaim the catastrophe of the fat body, and especially in the case of children. In Fed Up, we meet 12 year old Maggie, who cries in despair and shame because she hasn’t lost any weight. Only her body size matters to the filmmakers, and the commentary ignores how articulate she is, how insightful, or how much fun we see her having in clips of her swimming and kayaking with her friends. These ‘failed’ bodies are contrasted with the ‘good’ bodies of predominantly male athletes whose lean, able-bodied physicality signal the normative self-control of the disciplined subject. None of the films talk about the constraining effects and pressing demands of poverty, or the gendered labour of shopping for and preparing the fresh, whole food they recommended. 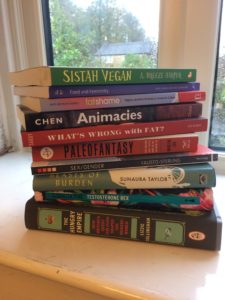 The fat-phobia of the films started to weigh heavily on me. The films are hate narratives parading as entertainment and they are stained with contempt for the fat body. I felt poisoned by them, and in spite of my very critical understanding of fatness, I had inadvertently made myself a target of their fat hatred simply by virtue of watching the films. It was dispiriting; a concentrated encounter with the hatred that the visibly fat encounter every day, and one that brought my enthusiasm for my new project temporarily to a grinding halt.
So what’s a researcher to do? Clearly, leaving the films unwatched and unexamined is not an option, so instead, I instigated an anti-sugar film self-care regime. The first step was to abandon my binge-watching strategy and pack away the films; I took a whole week off from watching and instead burrowed my way through a pile of feminist technoscience studies gems that restored my faith in the world and in my research. The second step was to move to a schedule of no more than one film per week; and then finally, to follow each film immediately with a book of such incisive and feminist potency that the fat-phobic stain simply couldn’t withstand its force. The take away lessons from this experience are: (1) pace yourself, especially with potentially upsetting material; and (2) never underestimate the restorative power of feminist literature.
- November 29, 2017