Sugar in the news

Over the last week, I've been conducting searches via the newspaper archive, LexisNexis, to create a  database of UK newspaper articles addressing the topic of sugar*. The aim of the exercise was to compile a dataset of texts (newspaper articles) which will be subject to a detailed critical discourse analysis, but in the first instance, it was also a chance to confirm the recent and dramatic rise of sugar in popular discourse - something which I have been asserting but wasn't able to demonstrate until now: 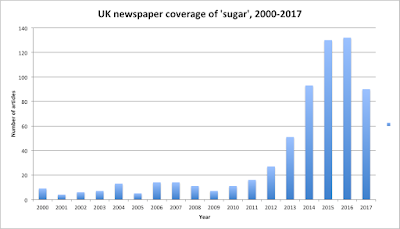 As you can see, coverage of sugar is steadily minimal until 2012/ 2013 (in spite of the fact that the 'war on obesity' raged fiercely throughout the first decade of the 21st century), after which it rises precipitously over just a few years. In spite of the modest drop in 2017, I anticipate a significant jump upwards again in 2018, which has already seen widespread reporting of the launch of the Change4Life campaign against sugary snacks, various interventions banning the sales of energy drinks to children, Tameside hospital's move to ban the sale of sugary foods as a response to staff obesity and calls for taxation of 'sharing' bags of chocolate. In part, this reflects a typical January pattern of anti-sugar, 'new you' reporting, but in the year when the 'sugar tax' will be introduced, I anticipate a lively news year for all things 'sugar'.

I'm now in the process of breaking the distribution of articles down into months, focusing on 2013-2017, and matching flurries of reporting with the key policy announcements and research publications (e.g. sugar tax announcements, the launch of the Change4Life Sugar Smart app, the 2015 launch of the Public Health England report on sugar reduction). These announcements, reports and research publications, as well as industry responses (press releases, marketing campaigns etc) will also be added to my dataset and analysed in dialogue with the media reports in order to explore the multiple discourses, practices and interests at work in the social life of sugar. And in doing so, I will also be asking: what is rendered invisible in those debates, what questions go unasked, and whose voices are heard / unheard?

More to follow as I start to work my way through the data.

*A word about methodology:
I tried numerous combinations of search terms, but in the end, settled for the simple strategy of searching for "sugar" in the article title in a given year in the following UK newspapers: The Guardian, the Observer, the Times and Sunday Times, the Daily Telegraph and the Sunday Telegraph, the Sun, and the Mail and Mail on Sunday. The initial lists of articles were then edited for relevance. For example, I removed all the recipes (which make up the bulk of December sugar reporting), articles about 'sugar daddies' (a discussion for another time), and the astonishing number of articles about Alan Sugar. I also removed all business stories (although I may return to this later) and excluded readers' letters, primarily in the interests of keeping the dataset within manageable limits. I also removed a number of articles using a range of sugar puns and metaphors (sugaring the pill, a spoonful of sugar) to headline stories but which weren't about sugar. This left me with a core dataset of approximately 400 articles (2013-17) for analysis, all circulating around the 'problem' of sugar as a (contested) threat to health and as a site of necessary and often urgent intervention.