On April 6thof this year, the Soft Drinks Industry Levy – more colloquially known as the ‘sugar tax’ – came into effect. Framed as part of attempts to tackle child obesity, the levy added 18p per litre for drinks containing 5-8g of sugar per 100ml, and 24p per litre for drinks containing more than 8g of sugar per 100ml. The levy was declared a success even at its outset, with a Treasury press release noting that since the announcement of the tax in the March 2016 budget, over 50% of manufacturers had already reduced the sugar content of their drinks in order to pre-empt the levy. The press release promised that the £240 million expected to be raised from the levy would be used to fund school sports programmes and breakfast clubs. As it came into effect, celebrity chef and anti-sugar activist, Jamie Oliver, tweeted an image of sugar cubes arrayed in front of bottles of soft drinks to show their added sugar content, along with the link to his website, where he applauded the move, describing sugary drinks as “the single largest source of sugar and empty calories in our children’s diets – action is essential”. 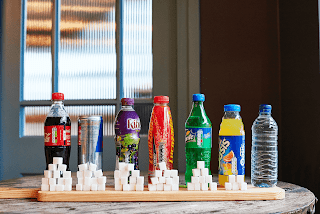 But amidst the self-congratulatory praise for the sugar tax from its advocates as striking a brave blow for child health in the face of industry opposition, the foundational assumptions upon which the sugar tax is built remain highly problematic, particularly in its loose relation to evidence and the dislocation of the desire for ‘action’ from the social and material inequalities which frame the consumption of sugar. In this blog post, I explore some of the debates and assumptions around the sugar tax and how these frame the ‘problem’ of sugar.

Responses to the sugar tax ranged from cries of ‘nanny state’ interference to celebratory demands to extend the tax beyond sugary drinks to include all high sugar snack foods. But they find common ground in the construction of obesity as a problem, with the fat body figuring variously as a disease, as the cause of other diseases, as the visible proxy for (preventable) ill-health, and most importantly, as a problem about which, in Oliver’s terms, ‘action is essential’ – a compulsion to act which loosens the reliance on evidence in favour of immediate action. For example, the case of Mexico is commonly cited as evidence of the effectiveness of taxation. Following the introduction of a tax on sugary drinks in 2014, sales fell by approximately 12% by the end of 2014 (and up to 17% among the poorest communities), fuelling demands for similar measures elsewhere. However, the health effects of this reduction in sales remain entirely theoretical, and there is currently no evidence of the desired health benefits for which falling drinks sales are mobilised as a proxy. Closer to home, Jamie Oliver’s 2015 decision to add a 10p levy to the added-sugar drinks in his “Italian” chain of restaurants, resulting in a 9.3% decrease in sales over 6 months, was hailed as auguring well for the sugar tax, with reduced consumption functioning as a proxy for health biomarkers and as predictive of the effects of a tax at the national level. However, this fails to take into account the class profile of his customers, who will already have been strongly attuned to the moral hazards of sugary drink consumption and Oliver’s vocal role as an anti-sugar advocate. Furthermore, it is disingenuous to align the decision to drink, or not drink, Oliver’s ‘fairtrade and organic’ Karma Cola (£3.00) on a restaurant night out with the real targets of the sugar tax – those of lower socio-economic status whose consumption is prefigured as excessive, ill-informed and most in need of intervention.

The construction of sugar as a ‘problem’ that affects us all, and of interventions aimed at middle class restaurant patrons as offering meaningful lessons across populations, entrenches and obscures social inequalities in ways that mitigate directly against structural change in favour of the coercive ‘nudging’ of food individualised food choices. For example, the channelling of the revenue from the tax into school sports smoothes quietly over the devastation of (state) school sports facilities by consecutive governments, while simultaneously shoring up the normative link between sport and the ‘war on obesity’. This forces those children already targeted because of their size to endure the shame of participating in a class whose specific goal is to eliminate bodies like theirs.

Plans to use revenue to provide food for hungry children also conceal disturbing truths about life in contemporary Britain through their normalisation of poverty and deprivation. For example, in January this year, a group of Conservative MPs including Jacob Rees-Mogg, Nicky Morgan and Nicholas Soames teamed up with ex-Labour front-bencher, Frank Field to call for revenue from the sugar tax to be used to address ‘holiday hunger’ among children with no access to free school meals during school holidays. It’s hard to object to hungry children being fed, but this philanthropic largesse leaves unaddressed the reasons why such a thing as ‘holiday hunger’ even exists in the UK today. Furthermore, it obscures the many other forms of suffering and hardship that a family experiencing profound food poverty must be negotiating, as well as the role of austerity measures such as benefit cuts and sanctions in creating and exacerbating those hardships – government policies supported by these same Conservative politicians (see for example, Rees-Mogg’s voting record).

Time will tell what effects – both desired and collateral – the sugar tax will have, but the aggressive pursuit of a single-nutrient solution to complex health and social problems should give us all pause for thought – not only in terms of who will bear the financial burdens of those interventions, but also what assumptions about individual responsibility, bodies and health underpin them. Just as Jamie Oliver’s campaign about sugary drinks isn’t really aimed at the consumers of his Karma Cola (or indeed his Epic Tiramisu dessert (£6.50, 40g of sugar)), the sugar tax targets the bodies and consumption habits of derogated Others, locking them into a narrative of exercise and education deficit to the exclusion of the broader social inequalities which they themselves might choose to prioritise as central to their own wellbeing.
- June 05, 2018