There's been a lot of coverage in the news recently of The Daily Mile - a scheme for primary school children started by Elaine Wyllie, a head teacher in Stirling, Scotland in February 2012. The premise is very simple: at some point during the school day, all of the children go outside for 15 minutes of running around a pre-marked course (e.g. laps of the playground), aiming to jog or run a mile. The website claims that after 4 weeks, most children are able to run the full distance, and there are anecdotal reports of improvements in behaviour, concentration and sleep. In many ways, it sounds fun to be able to take a quick break between classes to blow off steam and stretch your legs; as for all of us, long periods of sitting are uncomfortable and stifling and it's hard to argue with introducing a short movement break into the children's day.

But there's a more disturbing side to the scheme that is going missing in the enthusiastic reporting: the direct linking of the Daily Mile with anti-obesity agendas. The stated aim of the scheme is "to improve the physical, social and mental health and well-being of our children - regardless of age, ability or personal circumstances", but it is obesity that is singled out as the crisis that needs to be addressed; the programme's letter to teachers, for example, states that "UK children are now the most overweight in Europe, and activity levels are worryingly low". The other anticipated benefits figure as collateral to the core aim, which Elaine Wyllie articulates as, "to help tackle our growing childhood obesity and physical activity crisis". This anti-obesity focus is demonstrated in the recent publication of research measuring the effects of the Daily Mile, in a BMC Medicine paper entitled: "The Daily Mile make primary children more active, less sedentary and improves their body composition: a quasi-experimental pilot study".  Using data from pedometers, BMI, skin fold tests and a shuttle run exercise, the study concluded that the results show a relative decrease of 18.2 mins / day in sedentary time; a relative increase of 9.1 mins / day in Moderate-Vigorous Intensity Physical Activity (MVPA); an increase in 39.1 metres in the shuttle run test; and a decrease of 1.4mm in the skin fold test. It hardly seem surprising that the introduction of an additional daily physical activity both increased activity rates and lessened sedentary time broadly in line with the time allocated to the activity; nor is it particularly surprising that children practising running get better at a test that measures running ability - a set of findings that seem relatively benign (although the definition of 'fitness' based on how far and fast you can run is very narrow).

But the skin fold test (which was conducted alongside height-weight measures) is more disturbing, given the assumption that a decrease in skin folds equates to 'improved' body composition - a non-too-subtle coding for the familiar coding of body fat as problematic - which in turn functions as a proxy for 'health'. There is no information on the Daily Mile website about how the scheme is pitched to the children, but those taking part in this study can have been under no illusions that a primary goal of the Daily Mile scheme was to get rid of undesirable fat through athletic performance as they were weighed and measured. The website also reveals the neoliberal discourses of personal responsibility into which the children are being inculcated through the scheme. The website's section on Health and Wellbeing, for example, argues that "children become more aware of their health and the need to take responsibility for it"; and the section on introducing the scheme into early learning and childcare settings describes it as "the opportunity to develop their 'physical literacy' and improve body composition for the rest of their lives". It's never too early to learn that the fat body can never be a 'good' body, and that we are individually responsible for our bodily condition. The aim that the scheme is for all children "regardless of age, ability or personal circumstance" is admirably inclusive, but at the same time flattens out the social factors that constitute health outcomes beyond the reach of 'individual responsibility'.

I had other questions. If one of the goals is to inculcate exercise habits that they will carry forward into their adult lives, is making them run outside whatever the weather really the best plan? And how, for example, is the experience of the Daily Mile gendered? In particular, girls often have to wear skirts that will cling to / wrap around legs restricting movement; they might also be wearing tights, the crotch of which every girl and woman knows will slide down her legs as soon as she moves around; and girls' shoes are notoriously flimsy and unsupportive compared to boys', as we can see in this promotional shot from the Daily Mile website: 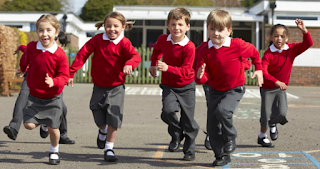 And this leads me to my final question: does it have to be running? I can see that the singular focus on running is central to the scheme's commitment to making the intervention as simple, practical and unobtrusive into the school day as possible, but it also ties one particular mode of exercise (and one easily coded as 'healthy') to positive outcomes in ways that exclude others and cement the normative link between exercise and anti-obesity. What results would we see if children enjoyed a 15 minute break to sing songs, dance, go outside to see how many different birds or insects they can spot, or learn to juggle....? I suspect that busy teachers everywhere are now rolling their eyes at the prospect of such potentially complicated interventions into their already over-stuffed days, and they're right of course (although this is more an argument for changing the appalling working conditions of teachers in this country than one for sticking with running for simplicity's sake). But it is important to separate out what might be the benefits of a break from studying, and what is specific to running. And following on from that, what about those children for whom this is a nightmare? The website highlights the enthusiasm with which the scheme has been greeted by children, and I don't doubt that for many, it is joyful and invigorating, but what about those children whose bodies are most obviously the targets of this intervention (and who are already identified by other children as such)? Or those who just don't like to run, or can't' run?

I suspect that all of this makes me seem like a bit of a grouch. But the tethering of this potentially fun and positive activity for kids to the forceful prejudices of anti-obesity casts a dark shadow over its possibilities. What if we were to encourage playful exercise and activity without ever mentioning body size (or 'composition') or using it as code for 'health'? What if all children's bodies were already good enough and not subject to demands for 'improvement' in order to be counted as good citizens? The clinging of the scheme to anti-obesity goals makes it a terrible opportunity lost to think about bodies differently.

As the Daily Mile story circulated online and through social media, a few people posted on Twitter that it would be great to introduce this into our workplaces, and all I could think was that collective running in unsuitable clothing at my place of work in order to 'improve my body composition' was a vision of hell. Children are not adults and their school lives are very different to adult work lives, but I did find myself wondering how many feel the same way and what long term effects this might have. What memories and practices will those children whose bodies don't fit the narrative of self-mastery and 'improvement' carry into their adulthood? This seems like a much more pressing question than how many millimetres of fat they have lost.
- May 13, 2018