The Conversation recently published a piece by Martin Cohen, visiting research fellow in Philosophy at the University of Hertfordshire, entitled: It's poverty, not individual choice, that is driving extraordinary obesity levels. The article is headed with the familiar visual trope of fat stomach, ready to burst its shirt buttons - a lazy, fat-phobic suggestion (albeit probably picked by editors rather than the author himself) of the barely contained threat obesity is perceived to pose, and a reminder that sites of fat accumulation offer a direct means through which flaws and failings of fat bodies can be known. 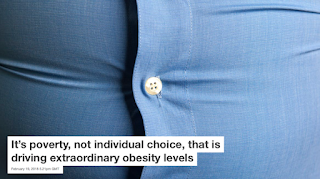 Contra recent high profile campaigns by celebrity chefs like Jamie Oliver and Hugh Fearnley Whittingstall, Cohen argues that "finger wagging at sugary treats" doesn't even come close to addressing the 'problem' of obesity, which he argues is "a product of social inequality and requires a collective response". In doing so, he rejects the prevailing focus on individual choice and responsibility, drawing instead an analogy with nineteenth century public sanitation programmes to tackle typhoid and cholera. He doubles down on this analogy in his concluding sentence that "we need to collectively tackle the places where obesity germs breed - in stressed communities characterised by insecure and erratic employment, inadequate education, stress, depression and a lack of social cohesion". Although I doubt that Cohen intends us to think literally of 'obesity germs', the phrase is unfortunate, gesturing towards the rhetorics of 'epidemics' and contagion in ways which feed the already overwhelming stigma and fear that fatness ignites. This feeding of fear is the overall thrust of the piece - that the "obesity epidemic" needs more attention and more intervention, rather than less, and particularly in those areas, and in relation to those people, where poverty and obesity have coalesced.

In my previous posts, I have repeatedly reiterated my frustrations at the ways in which the attack on sugar, and by extension, on obesity, overlooks the social, economic and environmental contexts within which sugar is consumed and within which demands to cut back on sugar are made. However, I am categorically not arguing, as Cohen does, that we need to take social inequalities into account in order to effectively tackle obesity. The proper response to the correlation between poverty and obesity is not to ask "what social or collective interventions would be required to stop poor people being fat?", but rather, "what can we do to stop socially disadvantaged people being socially disadvantaged?" The measure of success for interventions driven by this second question wouldn't be something as facile as how fewer litres of pop were sold in local shops, or how many people lost weight, but instead would focus on access to education, respectful health care, employment, safe living environments and food security as social goods in their own right. The linking of poverty alleviation with anti-obesity campaigns and interventions elevates obesity as the over-determining problem, and at the same time constructs a frame whereby fat bodies are always bodies-out-of-place; the eradication of fat bodies is the only possible measure of success for anti-obesity campaigns, whether focused on sugary treats or social inequality. As such, they will always be campaigns of social exclusion, rather than inclusion.
- May 11, 2018