A couple of months ago, I posted the first, very preliminary breakdown of my dataset of sugar articles in the news which showed how the newspaper coverage of sugar had ballooned from 2013. I've been working away on this over the last few months, classifying each of the articles with a single keyword reflecting the core theme of the piece, and then coding the newspaper text across multiple emerging themes. And here are some preliminary findings.

Firstly, this chart breaks down the annual article headcount into months, revealing key moments in the contemporary UK story of sugar:

Apologies if the detail doesn't come out too clearly, but what you can see in this is some clear spikes of media interest which map on to key events that then require further exploration. For example, the spike in January 2014 marks the launch of Action on Sugar - an influential anti-sugar voice with a sustained media presence since its inauguration; the highest spike (in October 2015) reflects the delayed release of the Public Health England report Sugar Reduction: the Evidence for Action; and the second highest spike reflects George Osborne's March 2016 budget announcement of plans to introduce a tax on sugary drinks. I'm developing a more detailed timeline of events, publications and announcements that sits alongside this chart, with all of the associated documents being incorporated into the dataset.

My next question was ask to which newspaper are reporting sugar: 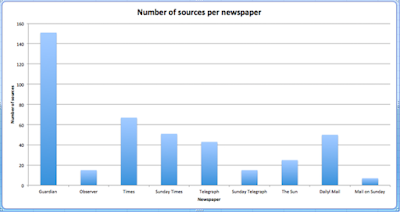 The Guardian comes out a clear winner here, perhaps reflecting the classed nature of concerns about sugar and the threat that it is perceived to pose (and by whom).

And following on from this, we need to know what aspects of sugar are being reported on; what is it about sugar that is grabbing media attention: 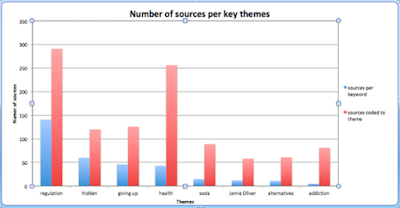 I need to explain this one. I attributed a key word to each newspaper article in an attempt to capture its overarching theme - the top 8 of these are shown in blue here. As you can see, questions of regulation, including taxation, prevail; second in line is the category 'hidden', which refers to the familiar "hidden sugar shock" stories which highlight the invisibility of sugar in everyday foods. But beyond the overarching theme, a number of these key words recur in multiple articles, and these were coded as themes as shown in the red columns here. So, for example, while almost 150 articles were attributed the keyword 'regulation', almost 300 discussed regulation in their content; and while fewer than 50 took 'health' as their main theme, over 250 made reference to health concerns in the content. The recurrence of these themes across content, regardless of the overarching theme of the article, highlights the discursive repertoires available to the media in their reporting of sugar.

This prompts a further question about whether different newspapers are reporting different aspects of sugar's story. The short answer is that they are, and I have a breakdown of the key words attributed to the articles from different newspapers, but I am struggling to find a way to visualise that effectively. This is a work in progress, but for now, I can say that while issues of regulation take primacy across the board, tabloid coverage includes far more 'hidden sugar shock', 'health' and 'giving up' stories, often pairing 'real people' with expert commentary to offer dietary guidance; conversely, broadsheet coverage is heavily weighted towards 'regulation' stories, particularly in relation to taxation. Part of the ongoing analysis is to explore the different ways in which the newspapers reported key events as a means of exploring the vocabularies of sugar.

There's so much more to do beyond these fairly simple acts of quantification, which are really only a means of ordering the data as a springboard for closer textual analysis. In particular, in addition to pairing up reporting with key events and documents for analysis, I'm also beginning much more detailed critical discourse analysis of the key themes, working my way through all of the data coded to those themes in search of patterns, contradictions and insights into the ways in which sugar is being made meaningful. I've started with "addiction", which is an excellent example of a theme that was only rarely taken as the overarching focus of an article, but which is invoked repeatedly and in diverse (and often taken-for-granted) ways in the body of the articles - a below-the-radar presence that speaks to a set of assumptions about our embodied relations with sugar.

In the mean time, it's hard not to be distracted by the coming into effect on April 6th of the sugar tax; there's been a torrent of media commentary, including new campaigns to include sugary sweets and snacks within the remit of the tax. In my imagination, there will be a book from this project, and an analysis of 2018 will definitely be included. But for now, I'm sticking with 2013-17, not least because I suspect that this is a story that will run and run without an obvious stopping point and I've got more than enough to be getting on with (although I do have a blog coming out shortly on another site about the sugar tax launch that I'll also post here).
- May 04, 2018