Our friends at Action on Sugar are at it again, this time for Sugar Awareness Week, which is taking dining out as its theme / target for this year. They have returned to their time-honoured formula of reading nutritional labels in order to uncover 'shocking' amounts of sugar in sugary foods in order to bolster a demand for nutritional labelling. This week, they have turned their attention to the 'freakshake' -a combination of milkshakes, desserts, sweets and cakes, brought together to form an overflowing, heaped confection that is purposefully and unavoidably excessive. 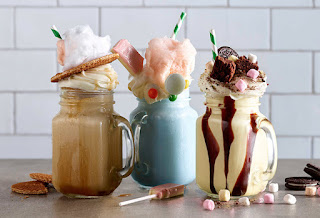 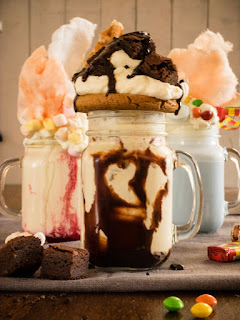 The freakshake was an innovation of the Pattisev Civic Cafe in Canberra in 2015, triggering a trend that blossomed and quickly ran out of steam, but which then travelled internationally. They are designed to be excessive, incorporating nutella, sweet sauces, cream, cookies, candy and cakes in a way designed to shock and delight. In the UK, freakshakes can be purchased at outlets like the Toby Carvery and Harvester.

In breathess horror, the Action on Sugar press release tells us that the Toby Carvery Unicorn Freakshake contains 1280 calories and that some shakes deliver up to 39 teaspoons of sugar; they called for a ban on similar products over 300 calories, and argued on Twitter that when consumed on a daily basis, they were the cause of obesity and tooth decay in children: 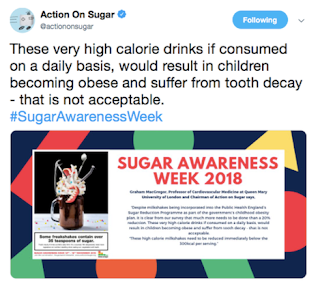 The focus on tooth decay is a relatively new departure for the organisation, whose primary focus has always been obesity. Concerns about tooth decay serve as a useful distraction here from the fat-hatred that underpins much of their public-facing material, and in practice serves as code for contempt for the fat body and its presumed (over-)consumption, as in their dental-themed poster: 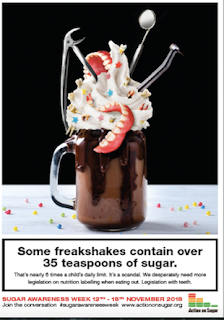 The media ate the story up, revelling in the obvious excess of the shakes and milking the controversial proposal to ban them for all it was worth.

But we should pause for thought. Firstly, the idea that these are being consumed by children, or anyone, on a daily basis is fanciful. At over £5 per shake, it is ludicrous to suggest that these are part of people's everyday diets. Instead, it is far more likely that they are an occasional treat, as well as a social event - a dessert to share and a piece of excess to photograph, enjoy and bond over. Secondly, the 'shock' expressed by Action on Sugar at the sugar content of these shakes is at best naive, and at worst, disingenuous. Of course they have a lot of sugar in them (and much else besides) - the name 'freakshakes' is the giveaway here. Thirdly, they have fallen into the familiar trap of focusing on nutritional content to the exclusion of context. The survey tells us nothing about how these shakes are consumed, and by whom, in what quantities and at what frequency. And this points to the fourth, and most damning, problem with Action on Sugar's latest 'hidden sugar shock' campaign - it's profoundly classed nature. By focusing on outlets like Toby Carvery and Harvester, they are signalling classed forms of consumption that suggest that only some can be trusted to consume treats moderately. No-one is calling on Jamie Oliver to ban his 600+ calorie dessert, The Ambassador (49g / 12 teaspoons of sugar), but 'highstreet' outlets - which is increasingly code for 'working class' - are directly in the firing line, presumably because their customers are not to be trusted in the face of the 'freakshake', which they are assumed to consume repeatedly and in ignorance. And this leads to the fifth problem - the assumption that the answer to the 'problem' of the freakshake, as with all processed foods, is clear labelling. The call for nutritional labelling is premised on the conviction that if only people knew what was in their food they would make better choices, but do Action on Sugar really believe that those purchasing a 'freakshake' are unaware that it has a high sugar / fat content? Are they not aware that the shared pleasures of excess are probably the precise point of purchasing it in the first place?

Sugar Awareness Week is a combination of shock tactics, calls for labelling that assume consumer ignorance, the dislocation food from the context of consumption, and miserly calls for small sugar economies: 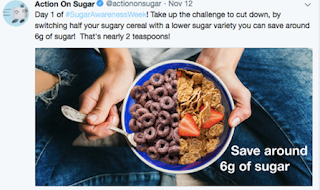 These are a disturbing echo of the demands that those living on ever-diminishing benefits should / could survive cheaply on less, effectively blaming them for their own hunger and malnourishment. The hand-wringing focus on the purposeful and celebratory excess of the freakshake obscures classist assumptions about the chaotic consumption and nutritional ignorance of the poor (and sick) and, once again, fails to engage with the social life of food and foodwork in the interests of political expediency and an easily packaged, attention-grabbing message.

I do not believe that Action on Sugar are actually shocked by the amount of sugar in a freakshake (and if they are, then they immediately relinquish the right to comment on nutrition), but I do believe that they are actively and cynically mobilising the rhetorics of 'shock' in order to communicate a message dangerously dislocated from the social world in which food - including freakshakes - is consumed and made meaningful. And for this reason, we should be very sceptical.