Last week, I took part in a wonderful symposium, organised by Elaine Swan (Sussex) and Maud Perrier (Bristol) on Foodworks: Gendered, Racialised and Classed Labours, and this felt like the perfect opportunity to try and work up an idea that I've been dancing around, but which I now think is going to lie at the heart of the book from the sugar project - the connection between austerity and the rush to sugar, or what I have called, the sweeting of austerity. This post gives a brief summary of the ideas I discussed in my paper, and which I hope will now provide the foundations for the book proposal that is languishing in my to-do folder...

One of the key questions I've been asking myself about the rush to sugar is 'why now?'. (There's a whole other question about 'why sugar?', which I'm also working on, but that's for another post). As this chart clearly shows, there is a clear rise in sugar reporting in the early part of the 2010's after a long period of very modest and steady reporting, and I've been struggling to explain it, beyond a rather vague allusion to the need for the 'war on obesity' to continually revive itself: 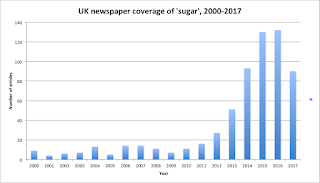 But I recently read Tracey Jensen's fabulous book on parent-blaming in the context of austerity, Parenting the Crisis, and was struck by the resonance of her analysis with the ways in which the 'problem' of sugar (and those who are deemed to over-consume it) is framed and represented. So I returned to my chart, and started to take seriously the timing of the rise of sugar in the news, and in particular, its coincidence with start of the 2010 Conservative-Liberal Democratic coalition government and their subsequent enactment of aggressive austerity measures, including the 2012 Welfare Reform Act. These measures shrunk the welfare state, enacted punitive sanctions against those unable to conform to the proliferating conditionality's of the benefits system and created conditions of profound precarity and poverty in some of the most disadvantaged sections of society. this occurred alongside, and was facilitated by, a hardening of attitudes towards those dependent on the welfare system, including health care, sedimenting a binary between the feckless 'scroungers' who are seen as irresponsibly over-consuming public resources and the deserving 'strivers' who work hard and take responsibility for themselves and dependent others, thereby limiting their claims on public services. From this starting point, I want to make the case that austerity provides the context through which the attack on sugar has gained purchase, particularly via discourses of irresponsible overconsumption (of sugar, of health services); and conversely, the attack on sugar shores of the figure of the abject other whose presumed fecklessness is central to securing public consent for the unequal cruelties of austerity (as Imogen Tyler explains much more eloquently in her book Revolting Subjects). As such, I'm not suggesting that austerity caused the attack on sugar, but rather, that it made it possible.

In my symposium paper, I focused on two aspects of these synergies between austerity and sugar. Firstly, I looked at the way that 'the poor' are repeatedly described as much more likely to consume higher levels of sugar, to be fat and to experience chronic (and expensive) health problems, and therefore, that they should be the prime targets for anti-sugar interventions which are presumed to provide greater health gains (and financial savings) among those communities. This targeting of the poor as simultaneously the problem and the solution (as with all austerity measures) dislocates those disadvantaged individuals, households and communities from the wider social context in which their poverty is realised and sustained. In this way, it is possible for Boris Johnson in 2015, while still mayor of London, to describe a sugar tax as "a matter of social justice" since "overwhelmingly the people who will be most affected by an obesity problem will be those on the lowest incomes?" - a claim which blatantly obscures the austerity measures in which Johnson himself is heavily complicit. In these claims to social justice, the poor are held accountable for their own ill health and suffering, both in terms of their presumed imperviousness to dietary and health advice (thereby placing them in the frame for the erosion of the NHS), and in their presumed dietary incontinence. As discussed in a previous post about freakshakes, the working classes cannot be trusted with treats and don't know when to stop. These discourses and practices of objectification and blame lie at the heart of the austerity project and lend themselves seamlessly to the attack on sugar.

The second aspect I addressed in my paper was the work that the attack on sugar generates, particularly for women, who, as the primary providers of reproductive and domestic labour, are held responsible for securing a 'healthy' diet for those in their care, including male partners. The newspaper are full of what I have called 'mortified mother' stories, which borrow the make-over format beloved of reality TV to expose a family's 'real' sugar consumption through expert evaluation, and then re-educate and reform the shame-filled mother. She learns to read labels to avoid 'hidden' sugars, calculate grams of sugar, make pasta sauces from scratch, cook porridge for breakfast rather than handing out cereal bars and generally lower her family's sugar consumption without inconveniencing them. The division of labour in the household is never addressed, and the gendered work of being what Change4Life call "sugar smart", like the gendered impacts of austerity more generally, are rendered invisible.

These economies rely on an endless series of micro reduction in sugar that are parsed by the teaspoon, as illustrated by these suggestions from Action on Sugar during Sugar Awareness Week: 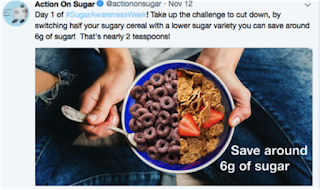 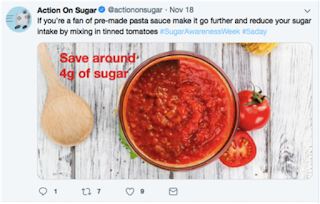 These normative sugar economies and their invisible footwork align comfortably with the romance of austerity, where thrift is celebrated in joyful contrast to the irresponsible over-consumption of socially abjected individuals (Tracey Jensen is eloquent on this romancing of austerity in her book). And just as the bedroom tax or a focus on benefit fraud make very minor contributions to the overall benefits bill but are symbolically laden and discursively potent interventions for sustaining and justifying health and social inequalities, so is the demand to save a teaspoon here and a teaspoon there. In this way, we need to understand the attack on sugar as never simply about an objectively knowable threat to health, but also a vector for social anxieties around deserving and undeserving citizenship, and warranted and unwarranted consumption (of food, of public resources).

This is what I mean by the sweetening of austerity, and hopefully, this will be the core of a book which is not going to happen quickly, but is one step closer to being realised.
- December 01, 2018